Many things have changed in the past few years – at breakneck speed! Technology is evolving rapidly – and unstoppable –  and with it comes the age of digitalization, playing a major part in all areas of the industry. Digitalization is here to stay!

It’s nothing new, that especially in the entertainment industry digitalization shows what it’s got. And it brings with it incredible changes to the AV interface, that make the audio- and video world that much more versatile and sharp. But what is changing in the transfer of video and audio data between players and playback devices and in the requirements for the connector?

From analog scart connections to digital HDMI transmission, we will show you what you need to know.

Read more, to find out which cable connection is best for your Digital Signage display.

Let’s go back to the beginning of the DVI interface, the first to enable optimal quality in digital transfer between graphic card and modern flat screen displays, moving us away from the analog connection.

Because originally a digital to analog converter (which is built into the graphic card these days) converts the digital data from the graphic card to analog data, so it can be transferred to the monitor from an analog connection (VGA). Since classic analog monitors of course need analog signals to display anything.

Initially even the modern TFT Displays (flat screen monitors) receive their data this way just to then convert the analog signals back to digital data via an analog to digital converter.

Sounds complicated? It is! And a lot of quality gets lost this way.

With the rapid changes to flat screen TVs (LCD or flat panels) the demand for a much more direct way of transferring digital data is growing. Without the need for converting analog signals first.

To sum it up: the display needs digital data, the graphic card provides digital data. So why is there no standard for getting the data from one to the other to prevent any loss of quality?

And this is where DVI comes in. The Digital Visual Interface (DVI) replaces the VGA connection (Video Graphics Array) between the modern monitor and the graphics card.

During the digital DVI transmission, digital color data from the graphics chip gets passed on to a TMDS transmitter in a parallel data flow of 24-bit. Here they are encoded into serial digital data. After that, the data is transferred via cable in a serial data transfer to the monitor, which is equipped with a TMDS receiver. This receiver again, decodes the data back to a parallel data flow.

DVI is mainly used in the IT sector as the electronic interface for computers and as a standard for video transmission. Even though there are TVs with a DVI input that can convert signals from digital sources, like a DVD player or a computer, there are different standards in consumer electronics. Mostly because the expectations in this industry are much higher and continue to grow.

Which leads us to our next topic: digital transfer via HDMI

HDMI is an advancement on DVI, mostly used in consumer electronics and responsible for digitally transferring video and audio data.

HDMI is backward compatible with DVI, meaning not all HDMI signals can be converted to DVI, not even with adaptors. DVI on the other hand,  is upward compatible in most cases. Meaning that such signals as digital signals (DVI-D) or analog and digital signals (DVI-I), can be converted to HDMI with the help of an adapter. So if you happen to already use a DVI cable, you will be able to transmit signals via DVI-D or DVI-I to an HDMI input.

Even though HDMI is used mostly in entertainment electronics, you may also find it in the IT sector. Since there are graphics cards that have a built-in HDMI output, a sort of HDMI adapter.

When comparing DVI and HDMI we can quickly see pro’s and con’s, as well as some qualitative differences regarding their application. The information regarding connection difficulties and wear can seem like a negative point at first, but the quality of the connectors itself, just like the overall quality standards, are consistently adapted and upgraded though.

HDMI however might still be the unique connection among several options. Expanding its lead with the ability to carry uncompressed video as well as uncompressed audio.

When we look at audio quality, HDMI is able to play stereo sound and home cinema atmosphere while DVI will entail the need for an additional cable to transmit audio signals.

Also when using HDMI, anything displayed is subject to copy protection HDCP. Whereas not every DVI connection is suitable for copy protection, so you will definitely have to check the descriptions. Because if the existing connection doesn’t fit CP, the DVD you just bought won’t show an image and the show in HDTV won’t either.

There might be connection problems with HDMI that lead to an outage of audio and visuals. But as mentioned above, this case is pretty rare today since standards are being upgraded consistently.

High quality video with no disruption combined with audio transferred at a high frequency rate – this is what HDMI delivers.

High Definition Multimedia Interface (HDMI) gives you a high resolution, in which videos and movies in HD (high definition) and UHD (ultra-high definition) are streamed without image disruptions.

HDMI iterations have been changing at a rapid pace since 2002 to include more and more specifications for the entertainment industry, providing the most in audio and visual quality. Next to continuing improvements in pixel rate, video resolution and audio formats,
we will show you the most interesting additions:

But it doesn’t stop here! The evolution of HDMI continues, providing revolutionary, crisper images with HDMI 2.0 and HDMI 2.0a.

However, it’s important to know that all HDMI functions are optional. Which means, that while all HDMI devices will have two audio channels and 480p, all other functions are not necessarily built-in or even supported in all devices.

If this was enough technical background information and you are ready to connect your own Digital Signage display:

More Entertainment with HDMI 2.0 and HDMI 2.0a

HDMI 2.0/2.0a, the newest update and interface as well as AV standard, surpasses its predecessors since 2013 with a significantly increased bandwidth, that allows 4K resolution at 60Hz. Small feature updates have been implemented since 2015.

This is especially interesting for gamers and the entire gaming industry, as well as for fast content videos, like action movies or sports videos. 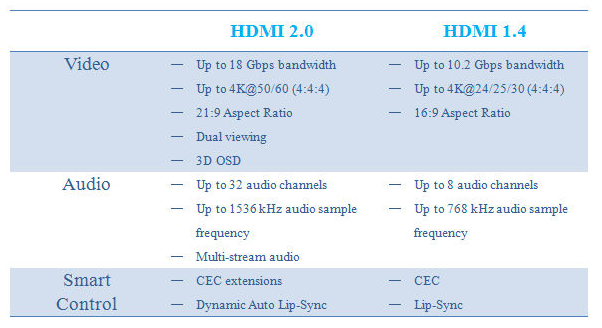 HDMI 2.0 is backward compatible, which means that you won’t have to buy new cables in order to connect your new standard. The cables that worked with your old HDMI versions, will also work with the new, as long as the device itself has HDMI 2.0.

So, Don’t Throw Away Your HDMI Cables

Because generally, all HDMI cables are compatible with all HDMI versions and thus interchangeable. Only when it comes to 4K resolution or 3D, a bigger capacity is needed.

To help you understand, have a look at this short overview:

4 Connector Types for Your HDMI Connections

Type C mini-HDMI cables and type D micro-HDMI cables can be converted to regular HDMI cables with the help of adapters and also used as such. There are also special connectors for the use in the car, to better secure the HDMI cable in a moving vehicle (Automotive Connection System).

The HDMI Future is Bright

So, what kind of high quality entertainment can we expect in the future? There are definitely exciting and innovative technologies on the horizon! It is already possible to stream realistic, clear and crisp video and audio data with a wireless HDMI connection, giving us a flexible and modern home theater and no more tangled wires. Unfortunately, most available devices are not yet ready for this technology. So for the moment, we can still rely on our current HDMI cables to connect.

The industry is already providing adapters that can be plugged into the HDMI output at the sender and into the HDMI input at the TV or player, but regular consumers still have to wait until our HD, 4K and 3D ready devices can bring wireless HDMI connection into the home theater. It’s a huge question of price.

Also discussions around 8K, which would give us eight times the resolution of Full HD, hints to exciting future innovations. Even though the Chief Product Officer Neil Hunt of the streaming giant Netflix indicated in a statement, that the future of TV is not in increasing the number of pixels, but in simply increasing the quality of them. So, we’re definitely excited for the future!

Until then, you will be able to find all necessary information about bandwidth, the different video-, audio- and color formats and all other designations and specifications that you need for your very own HDMI experience, here.

Our advice: always keep an eye on the listed informations and specifications
on the back of the device when purchasing.

Because not every Ultra-HD TV has to necessarily include all specifications of
a specific HDMI version. 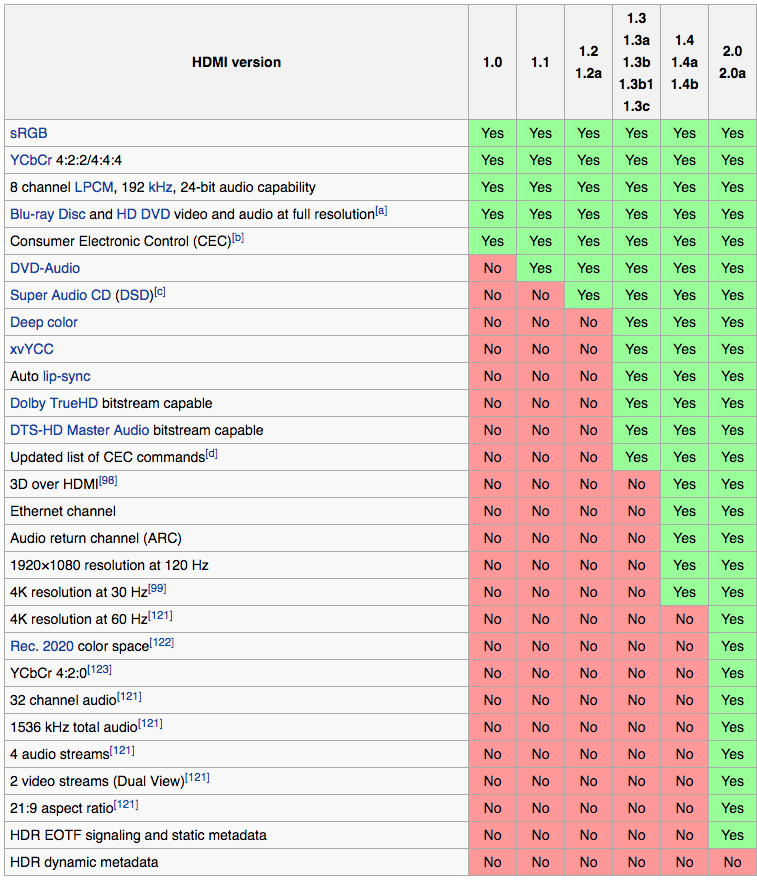 We’re more than happy to help if there are any further questions. So don’t hesitate to reach out to us for assistance in finding the right playback device for your projects.

IoT Devices: How they are changing the world as we know it